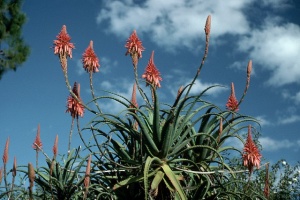 The Aloe leaf has polysaccharide in the parenchymal cells which is used by the plant for energy. Mucilage is a different storage form. All polysaccharides are not the same. When mucilage is placed over a wound, the wound remains moist and does not drop as does dry wounds. Epidermal and fibroblast growth factors come from the mucilage and stimulate the fibroblast directly for growth and repair. The cells as a result migrate within the wound in a proper manner to increase wound healing. The occlusive nature (cover) of mucilage increases wound healing from a mechanical and endocrine viewpoint. Mucilage is also a good anti-inflammatory agent. Some polysaccharides are immune stimulatory and this immune property improves wound healing probably through the macrophage. The big polysaccharides appear to be immune stimulatory whereas the smaller ones have anti-inflammatory activity. When an animal bites into the Aloe leaf, a hole is made in the leaf so that there is opportunity for the gel fillet to leak to the outside. However, this does not occur. The mucilage in combination with the Aloe gel hardens which seals the hole. Mucilage always hardens and acts as a container for the inner gel fillet. The transformation which occurs here is a sol-gel transformation of mucilage. Aloe vera tends to improve the penetration of water whereas mucilage tends to block the escape of water from a wound. We have been able to transfer the sol-gel transformation of mucilage and Aloe to an animal wound in which it improves an incisional wound some 130%. If Aloe and mucilage are placed between two sticks, it takes some 1200 gms of force to pull the sticks apart. Wound healing does not just require immune stimulation by polysaccharides but Aloes healing comes from growth factors, amino acids, glycoproteins, gibberellin, auxin and minerals such as zinc as well as polysaccharides. These biologically active agents synergize to give us the miracle of Aloe vera. Polysaccharide is not a magic bullet in that these other biological agents make major contributions to the biological activity of Aloe vera.

Aloe vera contains a large polysaccharide molecule which we have called the conductor. This molecule leads the many biologically active substances into a symphony of biological events to heal wounds, reduce inflammation and eliminate pain. The conductor molecule fits into the fibroblasts, similar to a lock and a key mechanism so as to set up a cascade of important biological events, supported by Aloe substances which are part of the orchestra. The polarity of water is needed for the polysaccharide to communicate with the active substances to synergistically achieve the maximum desired benefits. We opposed the theory that there is only one active molecule (a polysaccharide) responsible for all its beneficial effect. We are convinced that all the biologically active substances in Aloe are necessary to achieve the maximum-end-benefit. Only Aloe can attach the entire spectrum of human conditions because specific synergisms are brought into sharper focus. We have observed that if the polysaccharide from Aloe is washed extremely well – that is to remove all agents from it, the polysaccharide has very little biological activity. In fact, what is called polysaccharide is a polysaccharide with active orchestra members attached to it giving it biological activity along the lines we have discussed. If the polysaccharide is prepared in different ways, some activities may be lost and others remain. The “magic bullet” apparently requires a communication with orchestra agents to have its best influence.