The Model for Aloe Vera

The modern symphony orchestra combines instruments from strings, woodwinds, brass and percussion to form an ensemble capable of beautiful musical expressions. Each of these musical arrangements uniquely blends the sound of various instruments into one given tone. As an orchestra tunes up, each instrument creates its own distinctive musical notes. Out of this chaos comes the miracle of Mozart and the wonder of Beethoven.

One key element of the orchestra is the conductor. An outstanding conductor develops an orchestra by a combining many aspects of musical training. His role is to understand the potential contribution of each instrument and provide the leadership needed to create a synergy of sounds. Although his position is important, the talented orchestra players are the essential elements that must work together to produce the magic of a musical symphony.

How Aloe Vera Mimics the Orchestra 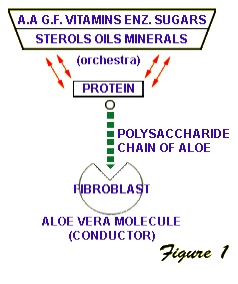 “The Conductor-Orchestra concept” was developed to better define the relationships that exist among over 200 biologically active compounds within Aloe vera (figure1). The Polysaccharides molecule acts as the conductor that leads a symphony composed of these 200+ biologically active compounds. The polysaccharide molecule consists of mannose molecules joined by beta I-4 linkages to form a chain. As the conductor, the polysaccharide modulates the biological activity between surrounding orchestra molecules to work synergistically. This conductor-orchestra relationship creates an infinite array of biological activities. The protein at one end of the polysaccharide helps direct the mannose phosphate at the other end into the insulin-like growth factor receptor. As part of the fibroblast, it produces collagen and proteoglycans to improve wound healing. The Aloe vera molecule can also stimulate macrophages to produce a variety of important biologically active substances. And it can recognize the receptors on other cell surfaces as well as recognize the individual players within the orchestra. In addition, the biological compounds indirectly help the conductor produce the biological response occurring at the cell receptor. Altogether, the Aloe vera molecule leads an orchestra of compounds working to produce a symphony of therapeutic effects. To suggest that the conductor – the polysaccharide – works alone in this complex array of activity is presumptive. Although there’s knowledge to gain from the isolation of biological compounds and activities, It seems unwise to search for a “magic bullet.”

What is the Role of Water in the Aloe Vera Relationship

The conductor-orchestra theory has been adopted by key Aloe vera suppliers and new manufacturing standards are being developed around this theory. A standardized “unit” of Aloe vera should be established by the industry that samples a predetermined amount of product for testing. This Aloe unit can then be tested and deliver a measurable biological-chemical response. Other approaches to determine the activity of Aloe vera, such as selectively testing only one, single component of this complex molecule, is unwarranted and unscientific based on our current knowledge. Clearly, a “magic bullet” approach is not valid. Science has proven that Aloe vera, in its natural composition, keeps the body in a healthy physiological state. This does not mean that the study and fractionation of Aloe vera is unimportant. Individual active components such as the polysaccharide may prove very exciting for specific applications. However, the study of Aloe vera and its complete compliment of components is necessary to fully understand the potential of Aloe vera.

The Yin Yang theory is used in eastern culture to indicate the active and passive principles that bring balance to the universe. These two forces interact to bring all things into existence. In a similar manner, Aloe vera moderates the balance of its own biological systems. Aloe vera has an inhibitory system that blocks pain and inflammation as well as a stimulatory system that improves growth and wound healing. Also, independent laboratory testing of Aloe vera fractions has shown their activity to include modulation of antibodies and cellular immunity. One example of the normalizing influence of Aloe vera is its inhibition of the auto-immune condition demonstrated in adjuvant arthritis. Overall, the beneficial effects of Aloe vera often result because two components act in such a way (Yin Yang) to normalize the balance of activity.

A Receptor for Aloe Vera 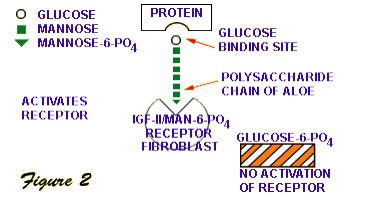 The receptor dynamics are part of the overall Aloe vera conductor-orchestra theory. One exciting characteristic of this theory is that the conductor-orchestra unit has little or no toxicity at very high gm/kg doses. Most of us working with Aloe vera have recorded no toxicity. In fact, we feel that Aloe vera can modulate, reduce and may even eliminate toxicity of other biological agents.

Mechanism of Action of Aloe Vera: Would Healing

The concept that the Aloe vera molecule synergizes with plant growth factors to repair and produce growth, broadly portrays the activity of Aloe vera (Figure 3). Three characteristics of growth factor activity in Aloe are:

The mechanism of Aloe’s inhibition of pain and inflammation will be detailed in the next section, first we must understand how Aloe vera enhances wound healing. 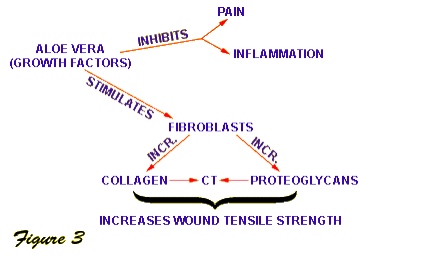 During the healing process, Aloe vera’s stimulation of the fibroblast produces and adds new collagen to tissue. However, we should note that macrophages can also secrete substances that can similarly stimulate fibroblasts. Whether the effect is direct (from Aloe) or indirect (from microphages), new collagen forms between the margins of wounds when Aloe is present. These collagen bonds are responsible for increased tensile strength. Therefore, if the tensile strength increases, it is assumed the collagen production is increased by Aloe. This is a different approach than the Danhof response of Aloe based on the uptake of tritiated thymidine, which only represents an increase in fibroblasts number. Whereas, we are demonstrating a functional increase in collagen and proteoglycans through wound tensile-strength. 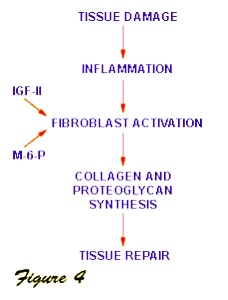 Inflammation is the response of living tissue to a damaging stimulus. It is a defense mechanism against a traumatic insult. On a molecular basis, the inflammatory process involves complex regulators, potentiators and mediators. A uniform response occurs regardless of the nature of the irritant event, though the inflammatory process may act as a double edge sword by also creating a threat to an organism. Inflammation by be acute or chronic. The acute inflammation response to a tissue insult involves the release of vasoactive substances. This increases the permeability of capillaries so that fluid goes into interstitial tissue and produces edema. Then, polymorphonuclear leukocytes (PMN’s) move out of the capillaries and are attracted to the injury site by a mediator called leukotrienes. The PMN’s increase their metabolism and oxygen consumption as they phagocytize the trauma debris. However, the products resulting from this increased metabolism contain oxygen radicals that attack the membrane lipids and produce further inflammation. If the irritant remains under the skin, chronic inflammatory response occurs. Connective tissue forms around the irritant and, over a long period of time, attempts to push the trauma outside the body. Lysozymes, products of these inflammatory cells, function in a manner to modulate neutrophil (PMN) activity.

Aloe vera is also used to inhibit acute inflammation. But, unlike steroids, it stimulates fibroblast growth to improve wound healing and block the spread of infection. This is the miracle of Aloe.

Studies have shown that since only about 1% of steroids can penetrate the stratum corneum of the skin,  99% is unavailable and wasted. Our data has shown that Aloe vera can act as a vehicle for steroids – to improve absorption and act as an efficient carrier. This is a significant economic consideration for Aloe vera.

The complexity of Aloe vera’s components makes the study of its anti-inflammatory activity a difficult task. Aloe vera does not have a single mechanism of action. Aloe vera contains amino acids such as phenylalanine and tryptophane that have anti-inflammatory activity. The salicyclic acid in Aloe prevents the biosynthesis of prostaglandins from arachidonic acid. This explains, in part, how Aloe reduces vasodilation and decreases the vascular effects of histamine, serotonin and other mediators of inflammation. Since prostaglandins play an integral role in regulating both inflammation and immune reactions, Aloe vera can affect both of these systems by blocking prostaglandin synthesis. The analgesic effect of Aloe vera is synergistic with aspirin. Since Aloe vera has both stimulatory and inhibitory components. Aloe can modulate both immune and inflammatory reactions. It can act as a stimulator of wound healing and antibody production. Aloe can block prostaglandin and modulate the production of lymphocytes and macrophage derived mediators (lymphokinins) including interleukins and interferons.

Besides Aloe’s effects on inflammatory and immune reactions, it also acts as a scavenger of free oxygen radicals produced by PMN’s. The vitamin C in Aloe that inhibits inflammation picks up oxygen radicals to block the inflammatory process. Vitamin E, a known antioxidant, is also a component of Aloe vera. These biological effects of the orchestra work in collaboration with the conductor (polysaccharide) to produce these valuable therapeutic effects.

Aloe Vera is a Biological Vehicle

Compounds that are poorly absorbed through the stratum corneum of the skin need a vehicle to aid them in penetration. Glucocorticoids and vitamin C are not absorbed well and, as a result, most of the material is wasted when applied topically. A vehicle must be found that solubilizes steroids and Vitamin C while at the same time hydrates the stratum corneum. As previously mentioned, Aloe vera’s anti-inflammatory, wound healing and analgesic properties make Aloe a “biological vehicle” that helps to nullify the detrimental activity of glucocorticoids but at the same time aids the penetration. Similarly, vitamin C is not readily absorbed by the tissue. However, vitamin C has been shown to help in the synthesis of collagen, since it may counterbalance the collagen breakdown to reduce the development of autoantibodies. In certain diseases, such as rheumatoid arthritis, the levels of vitamin C are low. Our data, thus far, suggests that Aloe vera aids in the absorption of vitamin C and adds to its biological activity. Although all the factors that control the absorption of vitamin C are not know, previous studies show esterifying ascorbic acid increases the availability to tissues so that the therapeutic dose can be reduced. In a similar manner, Aloe vera’s activity as a biological vehicle to increase the absorption of vitamin C may be just as possible.

Aloe vera can solubilize water soluble compounds as well as lipid soluble substances. Also, it can hydrate the stratum corneum cell membranes to aid a range of materials in penetrating the skin. The biological activity of Aloe can add and even synergize with many agents in producing therapeutic effects so that we call Aloe vera a “biological vehicle.”

Aloe vera contains polysaccharides that act as a conductor to direct biological activities among an orchestra of various molecules. Many agents within Aloe have been isolated, identified and demonstrated to synergize with one another over a large biological spectrum. A standard preparation of Aloe vera with a well-defined unit for each biological activity is necessary for future research. The conductor-orchestra theory opposes the idea that suggests that one molecule in Aloe (a polysaccharide) is responsible for the beneficial effects and that the standardization should be based on that polysaccharide. A greater understanding between the conductor and orchestra is needed to better define how Aloe vera synergizes its many activities. This understanding will change many pharmacologic concepts in the future. The conductor-orchestra concept will be practiced as the central format by which the Aloe industry will operate.