In looking closely at the functions of the Digestive System, it is much the usual thing to examine minutely the functions of its individual parts. Whilst it may well be necessary to do some analysis of that kind, it is usually far more instructive to consider the digestive system as a whole. The reason why this is so important is that the functions of each part of this system interact with those of every other part. Hence, if the digestive system is in difficulties, the job of restoring it to normal should not be tackled piecemeal, but rather in a completely wholistic manner. Before we can consider exactly what Aloe vera does within the Digestive System it is necessary to understand the normal functions of digestion and the more common forms of malfunction which may be encountered in practice. Whilst the first part may be accomplished by reading the appropriate chapter of any textbook of anatomy and physiology, asimple overall explanation is provided here by reference to the diagram below. 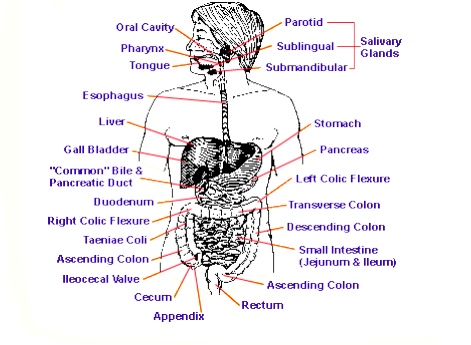 The food, upon entering through the mouth and undergoing mastication, becomes mixed with the saliva. As saliva contains a starch digesting enzyme, salivary amylase, the digestion of starch begins almost at once. On passing down into the stomach, the food meets the gastric juice which contains the protein-digesting enzyme pepsin and hydrochloric acid, HCI, which is there to provide the very low (i.e. acidic) pH at which the pepsin works best. Under good conditions, therefore, protein digestion proceeds apace in the stomach phase of digestion. The highly acid conditions in the stomach are also of importance in destroying bacteria which enter with the food. Most of the potentially harmful bacteria are killed by a sufficiently strong acid environment, while the more beneficial, acid producing bacteria, like Lactobacillus acidophilus are more likely to survive and to subsequently implant themselves to grow and reproduce in the intestines. A relative lack of stomach acid can therefore be harmful both because it impedes digestion of proteins by pepsin and allows some of the undesirable bacteria to pass through.

However, too much acid can be a serious disadvantage also, as we shall see below. This phase may characteristically last for about 2 hours before the stomach starts to empty, but is very variable. In particular the time of residence in the stomach is lengthened by a high fat content in the meal, which may delay emptying for quite a long time. When the stomach empties, its contents are passed on into the duodenum, which is the first part of the small intestine. Here the very acid, partly digested, fluid material, now called “chyle,” meets the pancreatic juice and the bile, which are both secreted into the duodenum, respectively from the exocrine pancreas and from the liver and gall bladder, (digest fats), trypsin, chymotrypsin and carboxypeptidase (to continue the digestion of proteins) and pancreatic amylase (to continue the digestion of starch). The pancreatic juice therefore amounts to a quite formidable battery of enzymes able to break down all the main bulk nutrients. The bile contains many wastes and toxins, for it is one of the functions of the liver to clear the blood of toxins and excrete them into the bile for passing out of the body. However, it also contains the bile salts, taurocholic and glycocholic acids, which are potent fat emulsifiers. These play an important part in fat digestion by breaking down the larger fat droplets into smaller ones. 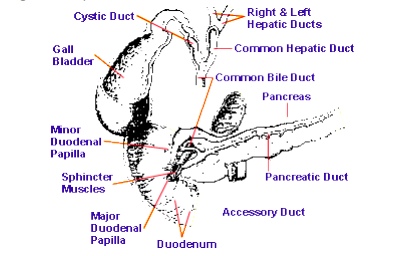 The duodenum is in many ways the hub of the digestive process, where numerous key steps are concentrated. It is extremely important that the control of pH within the duodenum should be correct.  The pancreatic enzymes have theirworking optimum on the alkaline side of neutrality, so they cannot work properly if the combined effect of the slightly alkaline bile and the pancreatic juice should fail to neutralize the strong acid of the chyle. Under these conditions, the chyle will remain acid and the intestinal phase of digestion cannot get properly underway. The situation will also expose the relatively delicate tissues of the duodenum to un-neutralized acid from the stomach and may encourage ulceration of the duodenum.

Digestion and absorption normally proceed, with fats being emulsified and partly broken down by pancreatic lipase, to be absorbed further down the small intestine, partly as fatty acids and glycerol and partly as tiny fat droplets which go into the blood as “chylomicrons.” Proteins are attacked extensively by the pancreatic proteases as intestinal digestion proceeds, and are joined by other enzymes which break down smaller peptides, some of these enzymes being produced in the intestinal juice itself otherwise known as the “succus entericus.” Eventually, proteins are reduced to free amino acids and absorbed. Starches are reduced mainly to maltose, a disaccharide which has then to be broken down to glucose by the action of the maltase enzyme in the succus entericus. Common sugar or sucrose, is split by sucrase from the succus entericus. As the food passes to the jejunum, (the mid part of the small intestine) and the ileum (the final part of the small intestine), these various digestive and absorptive processes begin to approach completion.

In the large intestine, or colon, much water is reabsorbed, which is a very important function. With this,  the colon also reabsorbs many important mineral salts. This reabsorption of mineral salts is significant because, although much absorption of minerals also occurs in the small intestine, this is never complete. This is more than just the absorption of dietary minerals. The digestive juices are mineral rich. If any significant proportion of the mineral reserves that are “invested” in the digestive process failed to be reabsorbed, that would represent a serious loss to the body. This is prevented by having a colon which is competent at mineral absorption. Under the best conditions, some small proportion of the total starch intake will remain by the time the food residues reach the colon. This will then provide an energy source for the Lactobacillus acidophilus and other desirable acid-forming bacteria. These, if they are well established there, will inhibit the growth of undesirable putrefactive bacteria and even pathogens, and are known to have some anti-tumour properties. They will also manufacture significant amounts of vitamins which supplement dietary sources of vitamins. High protein content should never be allowed to reach the colon, since it will lead to the production of alkali rather than mild acid. This will favour the undesirable putrefactive bacteria, pathogens and Candida albicans, and, through the decarboxylation of amino acids, will produce quantities of toxic amines which become absorbed and intoxicate the body and all the organs within it.