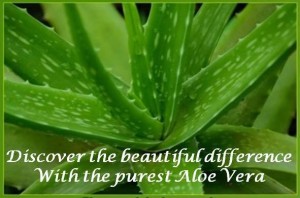 Aloe Vera
For over five thousand years, folk medicine has celebrated the juice of the Aloe Vera plant for its unique healing properties. Only recently, however, has modern medicine begun to unlock the deeper secrets of  Aloe and to place the “miracle plant” under laboratory scrutiny.   The Aloe plant is a succulent, consisting of thick green leaves with a gelatinous substance inside. Aloe juice, properly processed, contains a wide variety of healing constituents.  The principal attributes are: antiseptic, anti-inflammatory, and anti-viral.

Anti-Inflammatory
Aloe contains three plant sterols, which are important fatty acids-HCL cholesterol (which lowers fats in the blood), campesterol, and B-sitosterol.  All are helpful in reducing symptoms of allergies and acid indigestion.  These compounds also aid in arthritis, rheumatic fever, both internal and external ulcers, and inflammation of the digestive system. The stomach, small intestine, liver, kidneys, and pancreas can all benefit from these anti-inflammatory effects.

Anti-Viral, Anti-Biotic
Recent research has suggested some exciting new possibilities.  Aloe not only provides vigorous overall immune system support, but aids directly in the destruction of intravascular bacteria.  The reason is Aloe’s unique polysaccharide component.  The body’s natural “complement system” a critical defense system involving a series of proteins only needs to be activated in order to attack bacteria.  It is the polysaccharides that trigger these proteins in a sequence called the “cascade phenomenon” to take on a doughnut shape and insert themselves into the surface membranes of bacteria.  Through this action they literally create holes in the bacteria, exposing the pathogens’ interior to surrounding fluids, causing their death.

In the summer of 1989, internationally recognized AIDS expert Terry L. Pulse, M.D., conducted a systematic study of a unique nutritional regimen combining the use of an Aloe Vera drink with a supplementation powder and fatty acid capsules.  The objective was to determine if this nutritional.

One thought on “A Holistic Protocol For The Immune System”